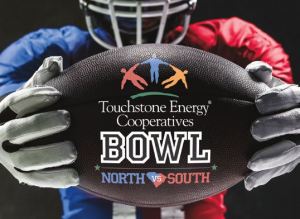 “These young men bring pride to their schools, to their communities, and their local cooperative,” said Broad River Electric CEO Terry Mallard. “As a Touchstone Energy Cooperative, we are glad to be a part of this honored South Carolina football tradition.”

Coaches reviewed nearly 450 nominations to come up with the final roster—44 players on the South squad and 44 players on the North. Don Frost of Christ Church High School will lead the North team this year.  Dwayne Garrick of Barnwell High School will lead the South squad.  The Touchstone Energy Cooperatives Bowl will take place on Saturday, Dec. 15 at Coastal Carolina’s Brooks Stadium.